Some of you know that from time to time my wife, kids and I get back to North Dakota to visit with family. This was a special trip, one I’ll share a bit more about later this week. Every time we go back, I try to bring a bike and I try to get out and ride in the big, big country of North Dakota.

Having grown up on a farm, land and open space have special meaning to me. I love the feeling I get when I am in it. I think that is why I probably ride gravel and dirt roads so often. Even though I ride often in the country, the land of North Dakota holds a special place in my heart and gives me a different feeling than what I get riding from the big city of Minneapolis out into the country.

A lot is going on in ND right now. It’s been a while for me since I have gotten out into the country of ND. Since my last big exploratory ride in ND, the state experienced massive flooding that changed the face of the community of Minot and surrounding areas. The Souris river valley that I like to ride and explore was essentially wiped out. What would remain? Couple that with the oil boom going on and the influx of people into the region. What would that bring? It was also earlier in the year than we usually go. What would I see? I was eager to get back to ND to see for myself. It did not disappoint.

I did not spend time taking pictures of the remaining devastation. It’s been over a year and it’s still obvious. Piles and piles of junk and recycling. Homes stripped to the studs and frames. Boarded up homes. It’s not all terrible though. Signs of hope and determination were everywhere with hard working folks rebuilding and reclaiming the land. The oil boom is for real. Huge trucks were everywhere. Housing is short and what is available is costly. Hotels are hard to book with new ones going up as fast as they can. It is a different world right now in ND.

All that said, I still found myself getting lost with only 2 cars passing me in my entire journey. Once you are off the main roads and into the country, it is still big county. It’s been some time since I’ve seen a spring in the country. Color abounded everywhere I looked. Greens. Yellows. Blue. Fresh. The land was alive. It was stunning and beautiful and just what I needed. The following pictures probably look a bit fake to some, but in reality, this is what my eyes saw. A highly saturated land. Hope you enjoy the pics. One day, I also hope that you get to experience the big country. 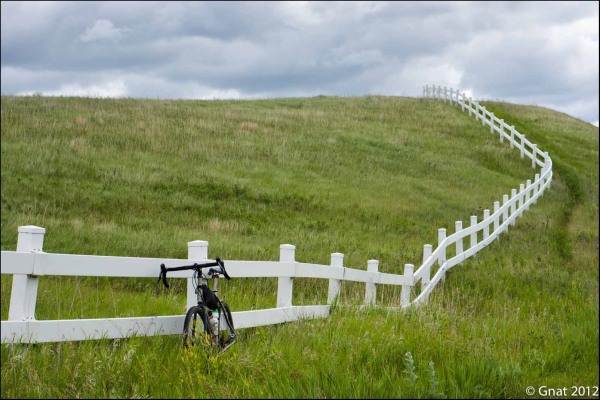 I ended up riding my Vaya Ti. I had planned on my Fargo, but honestly it still needs work after my Japan trip. I took the the bike in my quiver that is functioning perfectly and loaded it up on the car. On some portions like the trail above, I sure wish I had my Fargo, but if I just keep going slow and steady, I can ride most things put in front of me with my Vaya Ti.

It had rained heavily the night before. With constant 20 mph winds with gusts up to 30mph, the ground was soft but it did dry out pretty darn fast. The sky was very cloudy when I started, but there were no real signs of additional rain. I just pressed on and other than a really scarey dog chase, the only other things I saw were cows, farms and horses.

Eventually, the skies started to open up a bit. Larger patches of blue were on the horizon. I just stopped here to take it all in. I’m glad I did because I got to see this by complete accident.

As I was looking around, resting, eating and drinking water, I saw the smallest little bambi I’ve ever seen in the wild. It was pretty obvious to spot given it was walking across a black field. I did the 360 immediately and saw no mama dear. When it saw me, it crouched down flat on the dirt. I put the camera up to my eye and snapped a pic. Given, I shot this with a 75mm equivalent lens, you can see I was pretty darn close. Very cool.

I was zig zagging up & down and back & forth through the Souris Valley. The Souris Valley is a national wild life refuge. I sure wish I could ride past these gates. The paths look incredible. I did not though. Instead, I turned back and rode right back up the road I came on to find more roads. The gravel roads are endless up there just south of the Canadian border.

I eventually had to turn back south and whoa, was that tailwind incredible. I was spun out and rolling through the countryside. Loved it. It made every pedal stroke into that wind worth it.

Here’s a shot of the valley. Just over a year ago, where I was standing to take this picture was entirely under water as was that little house/shack down by the river. It’s amazing how people and nature adapt, recover, and find ways to preserve and prevail.

As I snapped that last shot, I thought of my friend Eric Benjamin, the Adventure Monkey. This image made me think of him and I spent some time thinking about him, his talents and his situation. He’s an inspiration to me, and others, and I’ve been too busy to tell him that. Eric, if you see this, know that I am thinking of you. I don’t know why, but this image made me think of you. Rich color. Rolling hills. Big country. Well, I guess that explains why I thought of you. Thanks again for your continued inspiration.

Anyway, lots of thoughts and images from my big ride in the big country. I’m glad I’m home now, but I can’t help but dream of more riding up there. It truly is an incredible area to explore and experience by bicycle.

Lastly, for the photo geeks, all shots were taken with my Sony NEX 7 with either the Sony 24mm f1.8 or the 50mm f1.8. I really do love this combo and for such a light set up, it sure packs a punch.